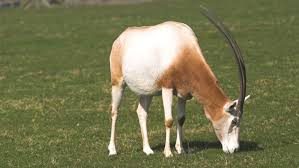 Scimitar Horned Oryx, also known as Horned Oryx, is a fast and strong antelope. The coat is white with a red-brown chest and black markings on the forehead and down the length of the nose. Below facts should be kept in mind if you want to take home the most precious of harvests, a Scimitar Oryx Trophy.

The below article discusses some of the most important facets that will help you with hunting of Scimitar Oryx.

The Scimitar Oryx, or Oryx can be easily identified by their long, graceful, ringed and curved horns that grow up to 40 inch in length. This large but beautiful animal, now extinct in wild, was once present in every part of North Africa continent. Male Oryx can weigh up to 400 pounds and are known to make a 180 degree turn and attacking the predator that is stalking them.

The Oryx is native of North Africa; they were imported into Texas during the 1970s. Now, ironically, they have gone extinct in the whole of Africa while about 10,000 are estimated to be roaming in Texas.

Females give birth to a single calf that weighs about 10 kilograms about eight to eight and a half months after mating.

Based on scientific studies, the Scimitar Horned Oryx are capable of surviving in the wild for up to 20 years.

Climate change is one of the major factors that contributed to the extinction of the Scimitar Horned Oryx. Increased human encroachment on their habitat and activities like domestic over grazing are some of the other factors which led to the extinction of this antelope. They have been extinct in the wild but their population has increased with the help of several hunting ranches in Texas.

Hidden Hills Ranch Texas gives you this opportunity to hunt this large & beautiful animal. Enjoy this one of a kind hunting experience and come home with a trophy that you will definitely be proud of.